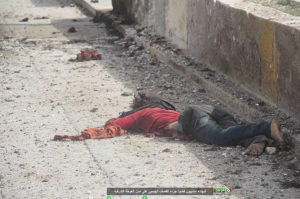 While Assad propagandists are on a frenzied campaign to portray the civilians of Eastern Ghouta as terrorists, human shields for terrorists, actors, & dolls, Russian & Syrian war planes have turned the area into a killing field, into an apocalypse.

Stand with the children of Ghouta & demand the immediate cessation of Syrian & Russian bombing of civilians & the immediate, unconditional withdrawal of all foreign military forces from Syria.