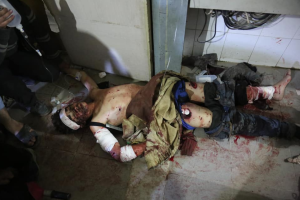 With Syrian & Russian barrel bomb & napalm attacks, it must seem like an apocalypse to the civilians of Ghouta. But when they understand such savagery was necessary to protect Assad’s national sovereignty, that they have to be bombed because terrorists are using them as human shields, that the White Helmets rescuing them are agents of American imperialism, all their furies will be resolved in gratitude to the führer. All you have to do is show them videos of Rania Khalek talking marble-mouthed about “head-chopping Wahhabis,” Bartlett & Beeley croaking paeans to the Syrian Army, or Jeff Mackler citing Stalin quotes to prove the necessity of Assad’s dictatorship & they will feel shame for grieving the losses of beloved family, friends, & neighbors.

Stand with the Syrian people & demand the immediate cessation of Russian & Syrian bombing of civilians in Ghouta, US coalition bombing in Syria, & the immediate, unconditional withdrawal of all foreign military forces from Syria.