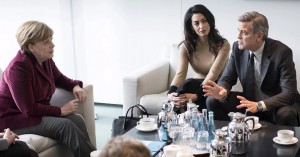 George Clooney has made a name for himself as an affable prankster. Why doesn’t he stick to what he does best? Why does a guy who spends most of his time looking pretty think he’s believable as an activist for justice? But every few years, he puts aside celebrity shindigs to grandstand around something political. This is where things get hairy for George, where he either gets in over his head or exposes that he’s not so affable after all when it comes to politics.

Usually, he comes on the scene lobbying for the US to send troops against Sudan to save Darfur. He’s always escorted on those occasions by John Prendergast, a nefarious US (probably CIA) operative in Africa. They both testify in Congress & Clooney gets arrested at a protest of himself, Prendergast, & a few movie extras–then he goes back to red carpet affairs where he’s most at home.

Now George accompanied Amal Clooney & David Miliband to Berlin to meet with Angela Merkel & discuss refugees & the work of the International Rescue Committee (IRC). Amal Clooney is always promoted as a human rights lawyer but her legal resume is quite a mixed bag. She has a few prominent human rights cases but mostly she’s on the wrong side of human rights. She came to prominence defending Enron; most egregiously, she defended the king of Bahrain whilst he was brutally, monstrously crushing the Bahraini uprising. For those who witnessed that extraordinary uprising for democracy so violently crushed, her defense of the king is more than enough condemnation for one lifetime.

David Miliband heads up the IRC–speaking of nefarious. It’s a front group for unspecified establishment malevolence. The board of directors includes Timothy F. Geithner (a protégé of Henry Kissinger & the Obama official who presided over the Wall Street bank bailouts). Its trustees include Henry Kissinger, Madeleine Albright, Condoleezza Rice, Colin Powell (the war crimes of those four need no elaboration); Elie Wiesel (who publicly accused parents in Gaza of using their children as human shields to justify Israel’s carpet bombing siege in 2014); magnates from JP Morgan Chase, Bank of America, Goldman Sachs, including Felix Rohatyn (who presided over the dismantling of social services in NYC during the 1970s) & James Wolfensohn (past president of the World Bank who dismantled social services on several continents); & the usual cosmetic array of celebrities like Clooney.

Too harsh on George? If he ever abandons his nefarious allies like Prendergast & the IRC & if he ever speaks out against US wars or takes a stand with Black youth against police violence, we can reconsider our contempt. Until then, he’s either a fool or a shill for the power elite. We don’t like to insult people’s intelligence, so it’s likely the latter.

Of course, the real question here is, what is the IRC up to with its phony concern about refugees? If the front group had any real concern, it would be denouncing NATO for sending warships against unarmed refugees in plastic dinghies & demanding the EU open the borders. Anything short of that is collusion.

(Photo of the Clooneys & Merkel from Reuters)