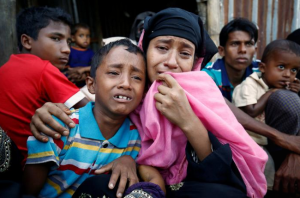 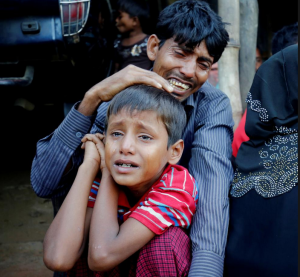 What is going on now at the Myanmar-Bangladesh border is a repeat of the refugee crisis of 2012 on a smaller scale. In 2012, the genocidal assault of the Burmese military forcibly displaced over 125,000 Rohingya & other Muslims in Arakan (Rakhine) state. So far in this assault it is estimated that at least 30,000 have been forcibly displaced in the scorched earth genocide led by the military. It’s not certain where that estimate comes from since journalists & human rights monitors are barred from entering the state.

The 2012 military siege was the first time most human rights activists around the world heard about the Rohingya even though the persecution by the military & right-wing nationalist Buddhists has been extreme for decades.

What made it news was that tens of thousands of Rohingya fleeing violence were turned away at the border by Bangladeshi border guards. The photos of their terror were horrifying because they had no recourse but to return to Myanmar. At least 150,000 ended up in concentration camps; an estimated 25,000 fled by boat through the Bay of Bengal & Andaman Sea trying to reach Indonesia, Malaysia, Thailand. That resulted in the boat crisis of May 2015 where thousands were abandoned at sea without food or water & there is as yet no accounting of what happened to most of them.

In 2009, Myanmar built a concrete & razor wire barrier wall along about 40 miles (70km) of the 120 km Naf River on the Bangladesh border. Those Rohingya fleeing the epicenter of the genocide at Maungdaw must travel about 60 miles (95 km) to Cox’s Bazar in Bangladesh where there is a registered refugee camp & tens of thousands of undocumented living in unregistered camps.

They have to travel from Maungdaw about 5 miles (8 km) to the crossing point into Bangladesh on the Naf River which is between two & three miles wide & then proceed the remaining 52 miles to Cox’s Bazar on foot. They cross the river in boats at night to avoid detection; some try to swim across. Hundreds are reportedly stranded there, unable to cross.

Just as in 2012, media is reporting that they are fleeing from “escalating violence,” “sectarian conflict,” & “communal clashes” because if they call it what it is–genocide–then foreign investors might be deterred by the political instability. It can never be forgotten that as the 2012 genocide unfolded in Arakan, the European Union, US, Australia, Norway, Britain were suspending sanctions on Burma imposed since 1988 for decades of human rights crimes. “Development” money & foreign investments flooded into the country. Capitalism never lets a thing like genocide interfere with profiteering.

The same kind of scenes we saw in 2012 appear again as Bangladesh closes its borders to the refugees fleeing for their lives. Both of these photos are weeping Rohingya refugees intercepted by Bangladesh border guards at a check point in Cox’s Bazar.

Immigration is a human right. Asylum from war & persecution is not only an ancient tradition in human civilization but embodied in international law. Bangladesh has every obligation to open the borders & provide sanctuary. If it claims it is unable to handle the numbers entering the country, it should allow the UN to register Rohingya & humanitarian organizations to provide aid to them. Most importantly, it should demand Myanmar end the genocide & demand other countries immediately reimpose sanctions until Rohingya receive full citizen, human, & democratic rights in Myanmar.