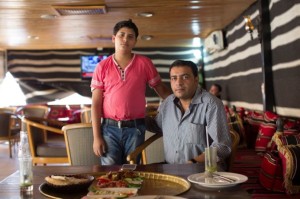 From “Humans of New York” album”:

“He lived with his mother in Gaza when he was very young. One night, I talked to him on the phone before bedtime, and he told me he was wearing three pairs of pants to bed. I said: ‘Three pairs of pants? Why aren’t you in your pajamas?’ He told me: ‘Because I want my body to hold together if a bomb falls on me.’”

This boy, no older than 9 or 10-years-old now, indicted Israel for several war & human rights crimes in a few simple words without need for UN or Human Rights Watch investigations & without the legalese & sophistry that lets Israel go scot-free after every phase of Operation Ethnic Cleansing.