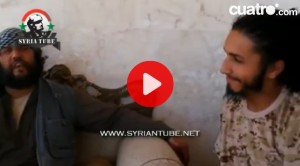 Clearly the US is crescendoing with the Islamophobia thing. You can see it in US foreign policy but also in things like Hillary Clinton’s distinct move to the right in a play for the presidency, sucking up to Zionism in even more unseemly ways than when she was US Secretary of State. But do they have to go bananas? You’d think by now they’d have worn that al-Qaeda thing to death since nobody believes it anymore–other than those who believe space aliens built the pyramids & the ones who read supermarket tabloids for news.

Anyone who lived through the Cold War of the 1950s & the McCarthy witchhunt in the US grew up on this kind of stuff: commies put fluoride in the water to corrupt the morals of youth; they were “masters of deceit” who believed in “free love” & infiltrated Hollywood, government, universitites, even the weather bureau. “Pinkos” were everywhere. The TV series “I led Three Lives” (de rigueur family viewing in the 1950s) had children trembling for fear of encountering a communist who would monkey with their morals & turn them into body snatchers or the “living dead”. So when they try to bring all that crap back under the guise of “jihadists”–the modern rendition of body snatchers–pardon us if we have a good laugh before we excoriate it.

The Gatestone Institute is described as a think tank but when you see who it publishes (Alan Dershowitz) & who runs the joint, you’ll see they give thinking a bad name & make it indistinguishable from stinking. It’s an unseemly lot altogether but then Zionism is sucking on the dregs; beggars can’t be choosers. The leadership includes: John Bolton; he’s the working class guy with the funny mustache who got straight A’s in school so he could worm his way into being on the goon squad for the White House. And in that position he’s served admirably if not also meriting an ignominious place in history. If you look up his curriculum vitae it has “high paid bouncer” written all over it.

Then there’s Amir Taheri, an Iranian guy, whose curricumlum vitae is mostly a list of denunciations by scholars of his forgeries & falsifications of history. There is also Robert J. Woolsey, Jr., who claims in his CV that he was prominently active in the anti-Vietnam War movement though not a single person present through it’s entire history has any recollection of his participation. He later served as head of the CIA so perhaps his presence at antiwar events wasn’t so much prominent as it was undercover. Last, but not least, there is Eely-Oily Weasel who has disgraced himself more than any man should in one lifetime. After his recent public spectacle accusing Palestinian parents of child sacrifice, he really ought to consider a rabbinical monastery somewhere–not for penance & reflection (that’s beyond him) but to hide out for a while.

The owner of the stink tank is Nina Rosenwald, who calls herself “an ardent Zionist” & whose family has deep roots in American Zionism; her father was a founding member of the United Jewish Appeal in 1939 which eventually amalgamated with several other groups in 1999 to become United Jewish Communities, an unabashedly Zionist alliance.

So under the leadership of these bozos the Gatestone Institute just published an alarmist article titled “Islamic State: “We Will Take Spain Back” by Soeren Kern, a right-wing “analyst” living in Spain. Senor Kern has an entire body of works on such subjects as the kebab shops in Spain financing global jihad, Muslims demanding the “right of return” to Spain, & the underage Muslim marriage wars. Get the picture? His theoretical pièce de résistance is “Minarets Are Our Bayonets”: The Swiss Vote To Ban Them” about right-wingers in Switzerland trying to outlaw minarets because Turkish Prime Minister Erdogan once implied the construction of mosques & minarets is part of a strategy for the Islamization of Europe. According to Erdogan: “The minarets are our bayonets, the domes our helmets, the mosques our barracks & the faithful our army.” Hasn’t the Pope said worse? We stand in awe. How can you excoriate what is completely indistinguishable from burlesque?

What our man Kern is so exercised about is that a couple pranksters posted a 20-second video of a guy in a phony beard & mustache wearing an Arab keffiyeh. Speaking Spanish “with a heavy North African accent” the guy said: “I say to the entire world as a warning: We are living under the Islamic flag, the Islamic caliphate. We will die for it until we liberate those occupied lands, from Jakarta to Andalusia. And I declare: Spain is the land of our forefathers & we are going to take it back with the power of Allah.” There’s a second jihadist sitting in the wings laughing his butt off.

Kern opens the article claiming “Calls to reconquer al-Andalus are becoming more frequent & more strident.” He quotes Spanish Interior Minister Jorge Fernández Díaz that “”Clearly Spain forms part of the strategic objectives of global jihad.” They neglect to mention the calls are not coming from jihadists in North Africa but from Spanish activists who want delivery from the EU & IMF austerity programs.

What is not at all amusing about this rubbish is that Spanish authorities claim these jihadists are coming in through Melilla, the Spanish territory in North Africa adjacent to Morocco where thousands of African immigrants attempt to enter Europe. In the past ten years they’ve arrested nearly 500 “suspected Islamic extremists” (whatever the hell that means) so they easily dovetail Islamophobic repression with attacks on immigrants.

Like we say, Zionism is scraping the bottom of the barrel & the dregs of 19th century racism & colonialism. If the best you can do is Weasel & Kern & the rest of this rogue’s gallery, bend over & kiss your ass goodbye.