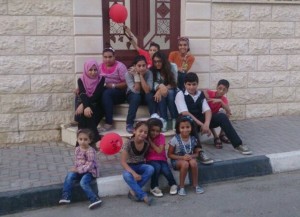 Project Peace On Earth (PPoE), a US humanitarian group that uses music to promote human rights, released the song Haumea (We Are The Ones) on Sunday to commemorate Easter & their hopes for peace in Palestine.

PPoE partnered with the National Centre for Community Rehabilitation (NCCR) in Gaza who assembled a Children’s Choir to perform. NCCR assists people with disabilities–a growing problem in Gaza because of Israeli bombing. The team from PPoE worked for three months to train the children who had no singing experience & then record the song & film them for the album.

Haumea was released on YouTube & Vimeo on Easter day but is part of a two volume album called “2 Unite All” to be released April 19th. Peter Gabriel, Roger Waters, & several other musicians will be singing 30 songs.

This is Haumea (We Are The Ones)–dedicated to Palestinian as well as Kashmiri, refugee, & other children suffering assaults on their lives & very humanity.