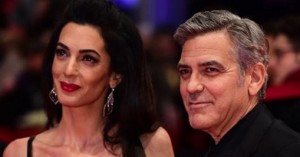 Can we put to rest the notion that Amal Clooney is a human rights lawyer? We’ll put aside her former defense of Enron; we’ll acknowledge she has a couple high-profile cases like Assange & the Irish republicans alleging torture by the British army in 1971. Good for her. It could mean she’s not completely corrupt. It could also mean she’s scratching for credentials.

If you’re a human rights lawyer, you can’t play both sides of the street. But she defended the king of Bahrain against charges of monstrous human rights crimes against activists in the Bahraini uprising of 2011, including using excessive force, jailing thousands, torturing many to death, excessive use of tear gas & pellet guns. Her defense was to clean up his image internationally when he’s a lowbrow murderous thug. For those who witnessed that glorious uprising, it is absolutely unspeakable she would defend the guy.

After Israel’s 2014 carpet bombing of Gaza, she was asked to be on a three-person UN commission investigating Israeli war crimes but declined citing schedule conflicts. It would be damn uncomfortable to cite Israel for war crimes & human rights violations if you support Hillary Clinton whose groveling speech to AIPAC vilifying Palestinians will go down in infamy. What do you bet that political relationship was more a consideration than her schedule?

As for George, he’s a worthless bum; war-mongering is the only time he emerges from red carpeting through life.

(Photo is the two of them taken somewhere by someone)