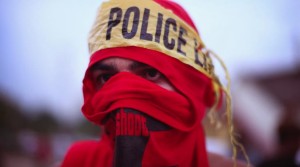 If life were even reasonably fair, Ferguson police & Missouri officials would go down not only as violent racists but among America’s dumbest criminals. Lawyers prep their lying clients to present a coherent alibi when they hit the courts. The Ferguson police department improvised a story about the murder of Michael Brown nobody could make head or tail of & presented it to media. It took a few days for media to chase down the young guy walking with Brown to hear his version which disagrees with the cop version & has somehow gotten lost in the revisions offered by police officials. They finally hit on the version (& obvious lie) where Brown was a suspect in a convenience store robbery but admit the cop who murdered Brown didn’t know that. There’s a simple rule to follow in life: a story that doesn’t add up is usually baloney. A kid can tell his teacher “the dog ate my homework” but when you murder an unarmed young man (known to everyone as a good kid) that kind of idiocy doesn’t cut it.

What we’re seeing now played out in Ferguson is the dog & pony show of the US war against the Black community & its kids. First they removed the white police chief & replaced him with the Black state trooper. The white cop was undeniably stupid but that isn’t why he was replaced. The trooper came on with the apologies & the commiserations; he had cops marching for justice against police brutality, photographed hugging other protesters, & solemnly bowing their heads at the prayer services for Michael Brown. It’s called street theater & it’s intended to mollify national outrage at a brutal execution.

As for using a Black cop against the Black community, that’s a device as old as the violent colonialization of the Americas & the extermination of native peoples. The US Army hired “Indian scouts” to pursue fleeing tribes & established Indian police forces on reservations. It’s still neoliberal colonial policy & the plundering war in DR Congo is the most ruthless instance of such treachery–where foreign mining companies hire militias among the Congolese to cover for their plunder.

The Democratic Party, whose primary function is to control popular unrest, hustled in Al Sharpton & Jesse Jackson, the DP apparatchiki they thought most able to pull the wool over people’s eyes. If they get their way, the massive uprising against police violence will be contained in prayer meetings & drowned out by “praise the lords” when a Black leadership not bought & sold to the highest bidder would be demanding national solidarity mobilizations to take back the streets of Ferguson & demand justice for Michael Brown.

While the state trooper is putting on the dog & pony show for media, the Missouri governor is deploying the National Guard, laying out a curfew as if the Black community was a lawless band of hooligans & looters. What happened to the Bill of Rights & the right to assemble & the right to protest? All the news now is about looters & molotov cocktails. Maybe a couple stores did get hit. So what? The only purpose for media focus on looting is to justify the continuing excessive use of force against thousands of unarmed, peaceful protesters who have had it up to their eyeballs with police brutality.

They’re using tear gas canisters & souped up humvees against unarmed protesters, assaulting & arresting people who by all reports remain peaceful but defiant of the curfew & determined to stand their ground against police violence. We cannot take our attention off Ferguson & we cannot stand silent any longer. Palestinians in Gaza, still recovering from genocide, have rendered solidarity to the Black community in Ferguson. The similarities between their struggles are not at all incidental.

“An injury to one is an injury to all”: that is our international clarion call to stand actively with the Black community in defense of their children against police violence.

This young man is in a demonstration to demand the end of police violence & the right for Blacks to assemble; he is wearing the mask against the police use of excessive tear gas.