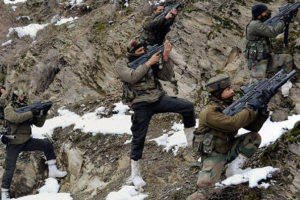 The death this morning of four Kashmiri policeman by an IED bomb in the town of Sopore is very tragic. Civilians were also injured, shops were destroyed in the blast, & Indian occupying forces are now hunting down those who laid the bomb. Kashmiris have a right to oppose the military occupation by any means necessary. Guerrilla warfare has not proven anywhere in the world to be the most effective means & Kashmiris in their majority use mass actions & mass strikes in its stead because it’s very difficult for ill-trained young fighters with a rifle to win against powerful, highly-trained, well-equipped military forces. It also attracts nearly as many agents provocateurs as inspired young freedom fighters. It is especially hazardous now that India is on a hunt to kill offensive executing so many freedom fighters.

Of course the incident would never have happened if police & Indian counterinsurgency forces weren’t heavily deployed in Sopore to prevent the 25th anniversary commemorations of the massacre of 57 civilians & an arson spree by paramilitary troops in 1993. This photo is Indian occupying troops who’d scare the hell out of anybody as they entered a town in force. The militant group Jaish-e-Mohammad is claiming responsibility for today’s attack but the onus belongs entirely to the Indian army & government who created the provocation by deploying troops armed to the teeth into the center of a town. Mehbooba Mufti, India’s chief minister in Kashmir condemned the attack & sent her condolences to the families of the four policemen. Meanwhile, the families of the thousands injured & disabled by pellet guns, the thousands incarcerated & disappeared, those executed in the hunt to kill operations, those whose homes have been razed to the ground are still waiting for condolences or even an expression of concern from Mufti.

The deaths of these four policemen are making international headlines. That would be good if the attention helped expose the character of the Indian occupation but it will be used mainly to associate the Kashmiri freedom struggle with terrorism. We need to counter that with the truth. It was a gruesome attack & no one deserves to die by being blown to smithereens. We only wish the Indian occupying army would not use their deaths to execute & injure more Kashmiris fighting for their freedom.