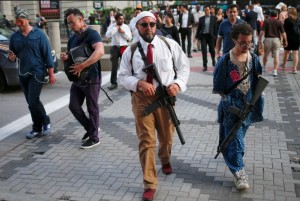 Fortress Earth: the dystopian, rightwing vision of security or what Drumpf proposes for “law & order.”

These half-baked advocates of open carry are patrolling the streets of Cleveland, Ohio with assault weapons during the Republican convention. Meanwhile thousands of schoolchildren, mothers with prams, people bustling to work go about their business unarmed.

Even as gunmen take to shooting & running down people in malls, schools, nightclubs, & public streets, is this the answer? Or is it possible to consider militarism & machismo gun culture as scourges to be addressed?

The historic imperative remains: rebuild the international antiwar movement & make our world safe for our children to come of age in, to live & love in.