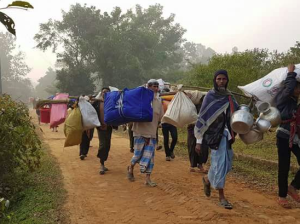 While Rohingya refugees are still fleeing genocide in Burma, still crossing the border to asylum in Bangladesh, officials from the Burmese & Bangladeshi governments are working out the final details for forcible repatriation to the killing fields of Arakan state. As it stands, deportations will start next Tuesday & the forcible return of hundreds of thousands of traumatized refugees to concentration camps built by the Suu Kyi regime will be over in two years. There are no reports that the UN or any NGOs have done more than whimper out skepticism when they should be screaming bloody murder that this scheme be dropped like a hot rotten potato.

Rohingya refugees are human beings, not livestock, & they have every right under every standard of morality & democracy to decide their own fate. Forcibly returning them to Burma is nothing but a continuation of the genocide. There is no way in hell that the Burmese military junta can or will assure their safety. Warehousing them in concentration camps will only provide another chance for the military & Suu Kyi regime to carry out the ‘final solution’ to exterminate the Rohingya people.

We have to mobilize all our resources in defense of the Rohingya people & oppose their forced repatriation. That means campaigning on social media, holding rallies, screaming bloody murder against treating them like livestock, & demanding asylum in other countries with full refugee rights.

This photo is Rohingya refugees being forcibly moved from one camp to another in Bangladesh to ready them for deportation.