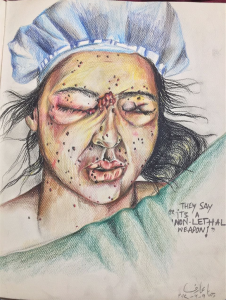 Just days ago, Indian Army chief Bipin Rawat said mosques & schools in Kashmir are spreading disinformation through social media & need to be controlled by the army. Yesterday, he came out with demands to snap the internet in Kashmir to disrupt terrorists & their supporters who use social media to spread radicalism. Taking his sarcasm & idiocy to their logical extremes, he added that snapping the internet was to prevent nuclear & chemical weapons from falling into the hands of terrorists.

Despite the idiocies of this fool, which resonate with those of the pumpkin in the White House, this is a serious attack on the freedom struggle in Kashmir. There was a news blackout about the occupation of Kashmir until activists on social media changed all that to educate & build international solidarity. Most media never reported on the Kashmiri struggle until activists on social media forced them to get back ahead of the news. We cannot allow India to get away with this. If Kashmiri & Indian activists don’t stop censorship of the internet in Kashmir, they will be facing it in India–& so will the rest of us. It’s an issue of international concern since FB is already censoring on behalf of several governments & is under political pressure to get more aggressive in weeding out “fake news.”

What India is trying to keep from public exposure has nothing to do with terrorists or Pakistan but with the barbaric assaults on unarmed protesters, especially with pellet guns.

Stand with the Kashmiris in demanding India end the occupation & self-determination for Kashmir.