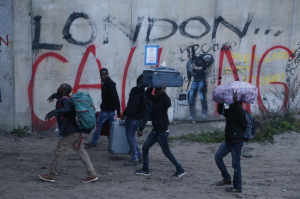 With the forcible evacuation today of 8,143 refugees from the “Jungle” refugee camp at Calais, the European Union & France can drop any pretentious claims to the values of the Enlightenment. The camp will be dismantled & refugees will be transferred to “reception centers,” which is a deceptive term for squalid, overcrowded prisons where they wait out deportation. Nearly 1,300 of them are unaccompanied minors who have not fared well under EU management & have reportedly ended up trafficked.

This monstrous violation of refugee & human rights comes just after the EU’s unsavory deal with Afghanistan to deport tens of thousands of Afghans in exchange for international assistance & after the EU’s money deal with Turkey to take back Syrian, Pakistani, Iraqi, & other refugees deported from Europe.

And that ain’t even the half of it: hundreds of African refugees continue to drown on the Libya to Italy route despite European fleets prowling the Mediterranean.

Refugee & immigrant rights have become absolutely central to democracy today. It doesn’t matter that capitalism in its barbaric phase has made such a disaster of life for working people even in the richest countries & claims there are no resources for refugees. If those regimes weren’t involved in wars, genocides, & plunder there would be no refugees. Who in the hell would want to come to Europe & the US when they are run by savages who treat human beings like dirt? They have every obligation under international law to accept & provide services to refugees. That’s the way civilized people roll.

These are refugees being evacuated & shipped to the prisons to wait out deportation.