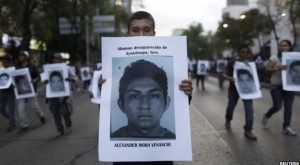 We should take a moment to honor the life of 19-year-old Alexander Mora, one of the 43 student teachers disappeared in the state of Guerrero, Mexico. His charred remains found last Sunday near a garbage dump have been identified by DNA testing.

Alexander was one of 8 Mora children from the small town of El Pericon, Guerrero. He helped his family work the fields but according to his father Ezequiel, his dream was to become a sports teacher & so he became the only one to leave their town to attend teacher college. His sister Edith said “”My brother was killed like an animal, but he was an innocent boy who knew nothing about life.” Unfortunately he knew enough to take a stand against injustice & that was his death sentence.

Protests continue demanding the recovery of the other 42 students. Families of those still disappeared reject the government’s scenario of what happened because it still can’t provide a consistent one. Mexican tyranny has been operating with impunity for a long time. It’s not accustomed to making an accounting & certainly not to telling the truth.

We honor our young brother Alexander; may he RIP. May international outrage over his gruesome murder continue to fuel solidarity & demand justice for his death.