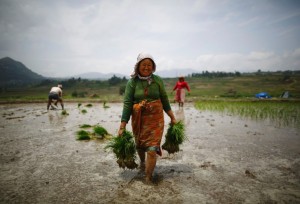 This is a woman farmer in Khokana, Lalitpur, a district in central Nepal. It’s not certain what she’s so happy about since the work looks like hell. We’re taught to assume farmers are mostly men when in fact it’s the primary work of most rural women. Contrary to the repugnant slander against our ancient mothers, farming is the oldest profession for women & they played a key role in the development of agriculture.

What’s interesting about the village of Khokana, with an economy still based on agriculture, is that it has an ancient Mother Goddess temple. Mother Goddesses personified the fertility & bounty of the Earth, often referred to as Mother Earth.

Cultural feminists from the women’s movement of the 1970s played the central role in popularizing interest in the Mother Goddesses & forged Wicca at one time as the fastest growing religion in the US & elsewhere. These feminists didn’t go back to farming but played an important role in educating women about our bodies & in advancing healthcare for women–which was a travesty in many ways prior to the women’s movement.

Whether religious or not, whether drawn to “pagan” goddesses or not, many women love to read about these Mother Goddesses because they represent a time in history when women were held in high esteem, when we were creative & powerful & not threatened with violence in a thousand different ways. It’s good to keep our ancient mothers in mind for inspiration because we have a long row ahead of us to plow to bring back those old glory days.