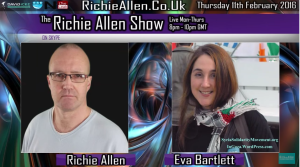 Libertarianism wasn’t a dominant ideology or political current for most of my political life. It was so marginal that most people still don’t know what it is. But in 2011, with the Arab uprisings, it came into its own & began to dominate & influence all sorts of people, including many socialists. It was like the invasion of the body snatchers.

When libertarian-think began to emerge in political discussions during the Arab Spring, I did a thorough study of what it’s all about because I was disturbed by the irrational denial, especially in Global Research, that the Arab uprisings were genuine mass popular movements & were instead political street theater orchestrated by the CIA & Mossad.

Well I’ve just made a discovery about its influence that is blowing my mind. The open collaboration between libertarians & Assadists Beeley & Bartlett has always been disturbing since a pivotal aspect of libertarianism is anti-Semitism & increasingly Islamophobia. Beeley is a regular interviewee on the Ron Paul show & both are regular contributors to Global Research, the very fountainhead of libertarian-think, & they both write for many other libertarian blogs. Their political base & support is libertarians.

In my study, I came across David Icke, an English libertarian, probably the best known in the world, who makes Ron Paul & Alex Jones look almost sane. These celebrity libertarians share a disturbed ideology that includes anti-Semitism, hating on Muslims who they see as extremists, xenophobia, racism, & anti-immigration views.

Icke sees himself as a demigod or some kind of savior. He believes that shapeshifting reptilian humanoids called the Illuminati run the world & are leading society toward a global fascist state. All this would provide great material for stand up comedians except that the heart of his imaginary universe is a vile & dangerous depiction of Jews & an anti-Semitism of the Nazi sort. In his theoretics, the lizard-like Illuminati are dominated by the Rothschild banking family who control everything in the world: banks, governments, media, corporations. How is that different from Adolph Hitler & fascist ideology? Not much.

I didn’t know Icke was a committed propagandist for Assad & for Russian intervention in Syria until I followed clues in some articles I read & went to Icke’s website. It’s like entering an obscurantist house of horrors & is politically indistinguishable from Global Research or RT. Lo & behold, Eva Bartlett is up to her eyeballs in direct association with Icke & his ideology. Both Beeley & Bartlett have been interviewed more than once about Syria on the Richie Allen show associated with Icke but Bartlett also has a longstanding collaboration with him as a writer & editor on one of his journals called SOTT.

Now the role that Beeley & Bartlett & their many disciples play in the Syria debate begins to make sense: the currents of thought control & paranoia about MSM; the cultish aspects; the hating on Muslims & Jews; the aggressive almost storm trooper debating methods; the enemy lists; the unmerited prominence both of them have in Russian & Syrian media, not to mention libertarian media.

None of these people are of any interest to me. I’ve seen too much infantilizing cultism in left politics to find it anything but pathetic. People have a right to hold whacky ideas & to worship crackpots. That’s not an issue & it’s none of my business. What concerns me & what I make my business is their destructive influence on the antiwar, Palestinian solidarity, & socialist movements. I don’t expect writing this will dissuade a single supporter of Assad or even give them pause to reconsider their political perspectives. But what they destroy must be rebuilt & understanding the process & the political forces involved in that destruction is essential to the regeneration.

It is not exaggerating to say libertarianism has profound affinities with fascism–maybe not yet fully realized but moving in that direction over Syria–which explains why fascist, not just right-wing but fascist, organizations around the world are among Assad’s most ardent supporters.