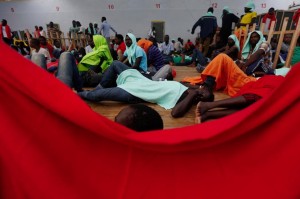 This photo is a Norwegian ship, part of Frontex operations & one of 26 European navies in the Mediterranean to deter the tsunami of immigrants & refugees. It’s been going on since April but there’s been no media coverage to speak of–likely because it’s a military operation & they don’t want us to know what they’re up to. There are occasional photos of an Irish ship rescuing refugees from sinking boats & reports of continued drowning.

Of course, it cannot be said enough it is unspeakable Ireland would participate in this military operation when it faces its own crisis due to EU-IMF austerity policies forcing thousands of people to immigrate for work. Thousands of them in the US face deportation for working without papers. But when you bend the knee to economic tyranny, such regrettable sarcasms are rife. Oh where is Jonathan Swift when you need him!?

The horrific drowning death of baby Alyan Kurdi will have profound affects around the world. In response, the EU/Frontex will likely circulate all sorts of heartwarming photos like this of the Norwegian navy picking up refugees–but only as window-dressing for their brutal military operations against immigrants. This ship is a pilot cutter ship; you don’t bring cutters along with destroyers, frigates, & gunboats to a search & rescue operation.

The immense outpouring of solidarity that thousands of Europeans & people in Iceland have shown to the refugees tells us of there is immense potential for building an international movement demanding governments open the borders & respect the human rights of immigrants & refugees. And we should not delay one moment in building that movement.

Media has always used the term “migrants” to describe immigrants & refugees. They know damn well the term is not just politically inappropriate but dead wrong in terms of the English language. A migrant is an animal or a bird. Under of the tyranny of racism they began applying the term to seasonal workers who move around the country. But now human rights activists have begun to challenge the racism & ugliness of that term & are even circulating a petition demanding media eliminate it.

Is there a new day dawning? A time when at last humanity will tear down the walls that divide us!? Only if we grab the moment & run with it to re-build the international antiwar movement to oppose the wars creating this tsunami of refugees–& build a movement demanding ‘immigration is a human right–open the borders.

The Norwegian ship is carrying rescued refugees to an Italian port where they will be processed & possibly deported back home so their rescue is where our work of solidarity just begins.