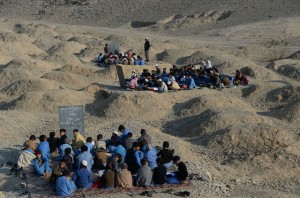 Emancipation US-style: these are children in an outdoor school in Nangarhar province, Afghanistan–adjacent to Pakistan on the east & Kabul province on the west. Jalalabad, the capital of the province, is 86 miles (153 km) from Kabul city (the capital of Afghanistan). Because Afghanistan is a land-locked country, US-NATO forces truck fuel & non-lethal equipment (munitions are flown in) through Pakistan’s roads, including the Kabul-Jalalabad Road.

Nangarhar is one of the principal agricultural areas in Afghanistan. This no longer means growing wheat, chickpeas, or corn but bumper crops of opium poppies for the export market. Afghanistan is the source of over 80% of the world’s opium. In 2008, the UN declared Nangarhar “poppy-free” but a recent report by the US oversight agency on Afghanistan reconstruction (which draws its figures from UN statistics) reported a fourfold increase in poppy production between 2012 & 2013.

The report claims the US spent nearly $8 billion to stop opium production. It’s true the US stages periodic drug burning ceremonies to dramatize its eradication program–just like they report some drug raids on the US-Mexican border. But the report does not explain why US troops are patrolling the poppy fields or why US aircraft are flying the stuff out for processing.

The report claims the Taliban fund their operations from opium profits but does not elaborate how they get tons of poppy plants out of the country without aircraft. Are they trucking it out on the same roads used by US-NATO? Are they waving at each other as they pass? It also blames Afghan farmers caught between chickpeas & the super-profits of opium & beholden to drug lords. So is it the Taliban or drug lords (many with close associations with the Afghan regime & hence the US) profiting from the poppies? It sure as hell ain’t the farmers.

Meanwhile healthcare in Nangarhar continues to decline. In 2005, 43% of households had access to clean water; by 2011 only 8% did. Healthcare has long been a disaster with over 60% of women giving birth without assistance. A US air force officer involved in discussions with Afghan officials said the healthcare catastrophe was due to “communication barriers” between the Afghan & US governments & NGOs. Funny that, since there are so few barriers when it comes to military operations.

US-NATO are now on a siege of Nangarhar, using drones to hunt down Taliban. That probably explains why kids are being schooled al fresco; the schools have been taken out by drones. Now the kids have no place to run, no place to hide. Of course, the drones could just as easily take out those poppy fields but as the Pentagon sees it, ‘why cut off your nose to spite your face’?