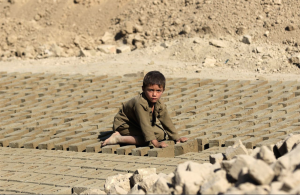 Emancipation US-style: When it comes to freeing the oppressed from tyranny, no one does it better than the US Pentagon:

Coming up on the 15th anniversary of the US-NATO invasion, there are millions of Afghan refugees mostly in Iran & Pakistan (where they are being victimized); Afghans are denied asylum in Europe; an estimated 150,000 Afghans have been killed since 2001–which is certainly a massive underestimation after 15 years of massive bombing; many Afghans have suffered & died from monstrous war crimes committed by US & NATO troops; hundreds of Afghans have been tortured & murdered in the notorious Bagram prison run by the CIA; child labor is rampant.

The US continues to fly hundreds of drone bombing sorties; admits to 10,000 soldiers deployed there but is likely lying & does not report the number of mercenary thugs it deploys which some estimate at 20,000. As of one year ago, 2.356 US soldiers died in the Afghan operation, not counting those who died later as a result of injuries or those 22 a day who commit suicide or those permanently disabled physically & psychologically as a result of the war.

We know something about the human cost of the US war in Iraq–which has not ended. Millions dead, millions disabled, millions traumatized for life. But the deaths of 500,000 children (reported several years ago & certainly not the number of all Iraqi children who have died) were “worth it” according to Madeleine Albright, Bill Clinton’s Secretary of State.

For the most part, there is a news blackout on the US war in Afghanistan which also involves Pakistan. Maybe that explains, at least in part, the weakness of the antiwar movement in protesting this war. There will be protests coming up for the anniversary of the war on October 7th.

The photo is a little boy, who cannot be more than 5-years-old, working at a brick factory in Kabul, Afghanistan. This is the face of emancipation US-style.

US out of Afghanistan! Out of Syria! Out of Iraq!

(Photo by Hedayatullah Amid/ EPA)