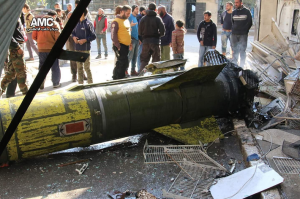 Emancipation Russian-style: this is an unexploded Russian missile in an east Aleppo neighborhood. When Russia bombs schools, hospitals, & municipal housing in cities of 250,000 civilians it isn’t war crimes because they’re doing it for a higher purpose: a secular & democratic dictatorship.

We are assured by many writers who support Syrian & Russian bombing that getting bombed to death by Syria’s barrel bombs filled with chlorine are not a more painful way to die than by one of these Russian missiles or by US missiles. We wonder where Craig Murray, Paul Larudee, Margaret Kimberley, & others get that information because to many it seems utterly callous, if not deranged. Since when do those who claim they’re antiwar make that kind of determination instead of vociferously opposing the use of any weapons against unarmed civilians?