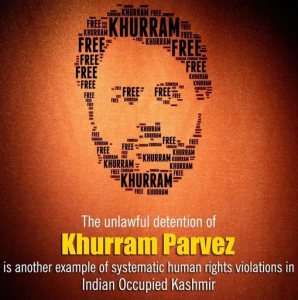 Khurram Parvez’s legal counsel announced that the administrative detention order against him has been quashed by a High Court & authorities have been ordered to release him from jail in Jammu. When he was originally arrested without charge in September, a magistrate ordered his release but Indian authorities then held him under the Public Safety Act allowing indefinite detention.

The Jammu & Kashmir government submitted an affidavit to the court opposing his release saying Parvez was “an anti-social element known for his anti-national activities,” uses his human rights work as a cover for his “secessionist ideology & inclination towards secessionism,” & most damning of all, wears “foreign clothes” which he carried in a suitcase with him to jail.

He is in jail only for his human rights activities in Kashmir investigating & exposing the forcible disappearance of thousands, their murders & mass graves & for his work strengthening bonds of collaboration with organizations of the disappeared around the world.