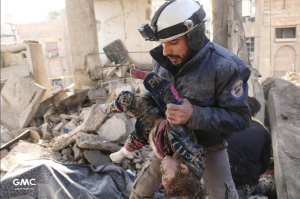 This is a White Helmet rescue worker carrying the body of a small child killed by Russian bombing over the village of Hamouriya in besieged Eastern Ghouta. For those confused about what is happening in Syria, the guiding principle is: the country bombing civilians is criminally culpable & on the wrong side of justice. Anyone who claims bombing civilians is justified in defense of Assad’s national sovereignty has abandoned basic political morality probably because they are reading too much fascist propaganda. Those socialists who claim political morality is greasy kid stuff have gone over to the dark side from which there is no return & which is a straight shot to hell.