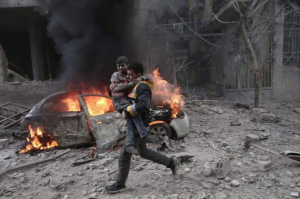 Russia’s defense of the Assad dictatorship’s national sovereignty in the village of Hamouriya in besieged Eastern Ghouta: hard to tell the difference from “Emancipation US-style” which also carpet bombs everything in sight to bring a civilian population to its knees.

What Russia did with the US elections–which during the best of times are a mockery of democracy–is secondary to what Russia is doing in Syria & to its arming of the Burmese military junta against the Rohingya people. If you support the Putin regime in this carnage, you are on the side of state terrorism & oppression no matter what illusions you have about standing against US regime-change scenarios.

The only principled demands are that Russia, Syria, & the US-coalition stop the bombing of civilians & for the immediate, unconditional withdrawal of all foreign military forces from Syria. Let Assad face the Syrian revolution without the aid of foreign bombers & counter-revolutionary militias.