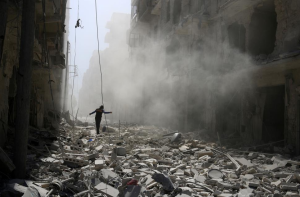 The Syrian military announced a new offensive to retake the part of Aleppo “under rebel & jihadist control since 2012” & urged the 276,000 civilians who live there to flee & surrender themselves to Syrian Army checkpoints.

There’s no report if anyone managed to flee “jihadist” control but the majority of them probably didn’t. So why would Assad & Putin massively drop bombs when they know the majority of those killed will be civilians, including children like little Omran? Is bombing people to smithereens now a form of liberating them from terrorist control?

When did bombing civilians become a form of freedom fighting? Is it to be condemned in Afghanistan, Iraq, Yemen, Pakistan, Gaza, & elsewhere, but heralded if the warplanes are Syrian or Russian?