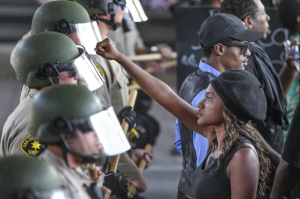 Fearlessness combined with fury at what seems an epidemic of police shootings of unarmed Black men: This is a protest in El Cajon, California (a suburb of San Diego) against the fatal police shooting last Tuesday of 38-year-old Alfred Okwera Olango.

Olango was a Ugandan refugee who came to the US at the age of 12 with his family for political asylum. According to his mother & his sister who made the 911 call, he had recently lost a beloved friend & was distraught with grief. He was not mentally ill as previously reported.

He was in the parking lot of a shopping mall when police officers approached him & demanded he remove his hand from his pocket. They will have to explain why that would be considered suspicious behavior. They claim he took a threatening “shooting stance” & so they shot him several times. There is video of the episode taken by a witness which the police have yet declined to release.