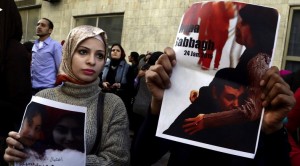 Egyptian women gathered, in defiance of a government law banning protests, on Thursday (Jan 29th) at the exact spot in downtown Cairo where activist Shaimaa al-Sabbagh was murdered by police during a peaceful protest commemorating the January 25th revolution against Hosni Mubarak. The protesters told reporters they organized a women-only protest to deter infiltration by plainclothes cops. Only male journalists were allowed. (Of course, now the regime will hire women cops & stick press passes on them.)

Sabbagh was killed by birdshot that hit her in the head, heart, & lungs according to the autopsy. Police not only shot her but then (according to several witnesses) prevented anyone from trying to help her & ignored pleas to let an ambulance through to take her to a hospital. According to some reports, her husband but according to other reports, a colleague carried her through side streets trying to get a taxi or private car to take her to hospital. She died on the sidewalk & was pronounced dead on arrival at the hospital she was brought to in a private car.

Despite photos & video of the police attack, the Egyptian regime is trying to talk its way out of culpability. The top prosecutor claims they’re investigating the murder & issued statements saying it’s not yet known who is responsible. Using divide & conquer, the regime has its stooges working overtime on social media claiming the Muslim Brotherhood (MB) is responsible. It’s hard to explain away that birdshot but the regime tried, claiming riot cops only use tear gas against unarmed protesters–as if that was a good thing. Talking out of both sides of their ass, they also accused the peaceful protesters of attacking the cops. Does that explain why they arrested the six eyewitnesses at the scene, including Sabbagh’s grieving husband, who testified to the police use of birdshot? Those arrested have now been released but the gulag still hangs over their heads since they face a list of charges including being part of an illegal protest, assaulting cops, & cutting off a public road.

At least 1,400 protesters (probably a lowball estimate) have been killed under the repressive regime of General Abdul Fattah al-Sissi since he took power in July 2013. Thousands more have been arrested.The protesters have included members of the MB as well as secular & other democracy activists. On January 25th, the day following Sabbagh’s murder, at least 20 others were killed in protests marking the 4th anniversary of Mubarak’s overthrow.

Sabbagh belonged to a socialist group that opposed the undemocratic regime of Mohamed Morsi but also opposed the military dictatorship of General al-Sissi. Images of her death were widely viewed on social media & have galvanized opposition to the regime & its ban on protests. Hopefully members of the MB & other activists can forge some unity in challenging the ‘new regime, same as the old regime.’

Egyptian women played a fearless role in the 2011 revolution against Mubarak. At Thursday’s protest–& at considerable risk to themselves–they chanted “The interior ministry are thugs” & “Down with military rule.” Some held placards with the picture of the Interior Minister with the words “Murderer” & “Wanted, killer of Shaima al-Sabbagh.” A hashtag for the demo christened al-Sabbagh “the martyr of flowers.”

Our deepest respect & fullest solidarity with the women protesters. The Egyptian regime is armed to the teeth against its own people by the US Pentagon as part of a devil’s bargain to support Israeli apartheid against the Palestinians. Our commitment is to continue telling the truth so that when US working people get off their leaden asses they will know which side to stand with.