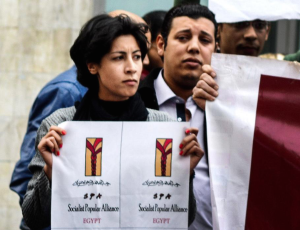 Egypt’s highest appeals court today overturned the conviction of the police officer sentenced to 15 years in prison for the execution of unarmed protester Shaimaa el-Sabbagh on January 24th, 2015.

This is the junta’s flouting of justice since there is no dispute about the circumstances of her execution. It was filmed & photographed by several journalists & bystanders as she participated in a small, peaceful demonstration to commemorate the hundreds killed in the 2011 uprising that overthrew Hosni Mubarak. According to many witnesses at the scene, police also refused assistance as she lay dying on the street.

Shaimaa was 31-years-old & the single mother of a five-year-old boy. She was a poet, studied folklore & documented traditions in small villages; she was an activist in the small socialist group which organized the march.

Those who knew her described her as a kind & calm woman who was supportive to others. Despite the restoration of military rule, she was optimistic about the political future of Egypt.

Hosni Mubarak had quite a different experience with the junta courts. After a few years of dog & pony legal spectacles, he was sentenced to life imprisonment for corruption, abuse of power, & failing to halt the murder of peaceful protesters during the 2011 uprising. “Failing to halt” when it is certain he ordered them to be shot. Six months later, another court overturned that sentence & ordered a retrial, along with his corrupt sons. The retrial worked out real well for them. They got prison sentences in 2015 but the sons were sprung out 6 months later. Mubarak is reportedly detained in a military hospital. What do you bet, he’s really lolling in his mansion?

This kind of justice is all backed by the US, originally brokered by then Secretary of State Clinton, & part of the long-term deal brokered in 1978 by then President Jimmy Carter in the Camp David Accords which armed Egypt against its own people in return for the regime turning its back on support for Palestinians.

Our fullest solidarity with activists in Egypt & our deepest respect.

This photo of Shaimaa is from the protest where she was murdered in Cairo.