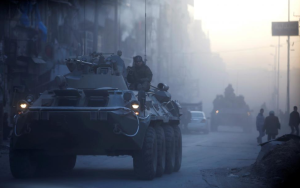 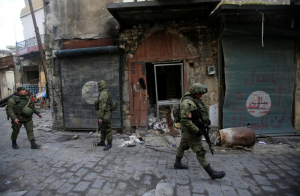 Propagandists Eva Bartlett & Vanessa Beeley are touring the globe to speak about Syria. Bartlett is in Canada denouncing fake news like a broken record, & with her fingers always on the pulse of substantive avant-garde politics, taking time out to campaign against the “The White Helmets” movie getting an Academy Award for best short documentary.

Oddball socialist groups (& anybody who knows socialist groups knows just how oddball they can be) in Finland & the UK are sponsoring Beeley speaking & presenting her slideshow of the “liberation” of east Aleppo. She has albums of herself surrounded by jubilant children celebrating the Syrian army & speaks of residents dancing in the streets after 6 years of carpet bombing by Syrian & Russian warplanes. You wouldn’t think war-traumatized children would be up to boogying & jubilation but that’s what our “independent” journalist reports.

Though Beeley & Bartlerr are escorted by Assad officials & protected by Syrian soldiers in Syria & most journalists are banned from entering the country, they continuously taunt media for not being in east Aleppo. Well apparently Reuters photojournalists were recently issued visas & traveled to “liberated” east Aleppo, of course without military protection though not without regime surveillance.

What they found in east Aleppo is quite at odds with Beeley & Bartlett’s liberation narrative. The two of them better hotfoot back to Damascus to find out how they’re supposed to explain what Reuters is turning up because it doesn’t look at all like liberation.
Reuters didn’t record any street dances nor any jubilant kids. They found the streets heavily patrolled by Russian armored vehicles & heavily-armed Russian soldiers on foot patrols. Pardon our confusion, but that looks like a military occupation & nothing like a liberation. Why would Russian troops have to heavily patrol a city where the residents think of them as emancipators from terrorists?

Does this look like occupation or liberation? Will we be given another round of fake news accusations to explain all this?