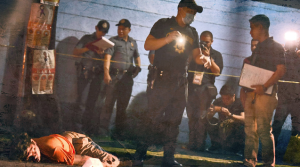 In the four months since Philippine president Rodrigo Duterte took office on June 30th until November 7th, a total of 4,812 suspected drug users or street peddlers were gunned down on the street in his war on drugs. According to police officials, 3,001 were victims of vigilante killers, usually described as two drive-by shooters on motorcycles, & 1,811 were killed in police operations.

Many of the extrajudicial killings are in Mandaluyong City, a part of the Manila metropolitan area with large redevelopment projects for gentrification. Huge sections of Manila are undergoing gentrification to build upscale condos, shopping malls, resorts. There have been years of pitched battles between slum residents being forcibly removed by bulldozers & riot police. There are countless slum fires with no forensic reports except fire officials scratching their asses in confusion & blaming it on building materials for shanties or cooking fires. They are much more likely arson for purposes of gentrification.

It’s all of a piece–torching slums & shooting down suspected drug users. It’s not a war on drugs. It is a war on the poor.

Anyone who claims to be for human rights & does not denounce Duterte but defends him because he talks trash to the US should stop kidding themselves. They may also want to explain the deployment of Filipino troops to the Golan Heights. It doesn’t have to be said that most of those defending Duterte are also supporters of the Assad dictatorship & Syrian & Russian bombing of civilians. It’s also of a piece.

Our condolences to the victims & families of those murdered. May they Rest In Peace.