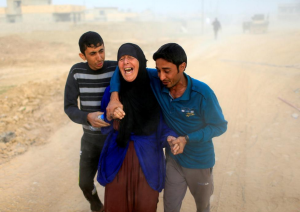 Emancipation US-style in Iraq: this is an unidentified displaced Iraqi women just after learning her 15-year-old son was killed, reportedly by an ISIS mortar in Mosul.

For those who advocate a US-imposed No Fly zone in Syria, there were two imposed in Iraq by the US, UK, & France between the 1991 Gulf War & the 2003 US invasion of Iraq–ostensibly imposed to protect the persecuted Kurdish minority in Iraq. Only those too stupid to vote believe that.

CBS news reported tonight on the prosecution of Somali youth in Minneapolis for joining ISIS in Syria. Their attraction to such violent politics is a concern. But quite frankly, it’s also a concern that young people are attracted to the politics of the US Marines & US Army.

There is no human liberation rooted in militarism. Bombing, special forces, & mercenaries are never going to be freedom fighters. This war against ISIS is a continuation of the Gulf War of 1991. Anyone who looks to the US military for emancipation either needs their head examined or has another political agenda.

US out of Iraq. US out of Afghanistan.
US, Russia, & all foreign military forces out of Syria.