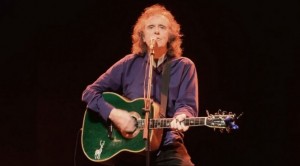 Behold the weasel Donovan! After the Scottish singer cancelled his Tel Aviv concert in January, BDS supporters jumped to the wrong conclusion & went to his wall with profuse gratitude assuming he’d done it to respect BDS. We didn’t know he was running us around the block.

The postponement was a cover. They changed venue & the new troubadour for apartheid performed last Saturday to raise funds to support transcendental meditation in Israel. Only 400 people showed up at the second-rate venue. So at least Israelis have a measure of what kind of musician is willing to disrespect BDS & entertain them.

When asked by Israeli media if the cancellations had anything to do with BDS or “threats over performing in Israel,” Donovan drew on the sentimental dreck his music is noted for, like “Mellow Yellow” & “Sunshine Superman,” calling himself a “a Gaelic Bard of the highest order.”

It’s always disappointing when people refuse to do the right thing; it’s damn ugly when they try to cover their asses with sentimental dreck.