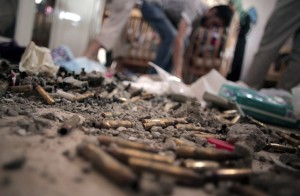 Now here’s a curious phenomenon worthy of a UN investigation for Israeli war crimes. Israel claims it bombed homes, schools, hospitals, mosques, markets, & refugee centers to take out “attack tunnels” hidden in them between Gaza & Israel which Hamas would use at some future point for terrorist attacks on Israel. There are presently no charges against Hamas for ever having used one of these tunnels to enter Israel. There’s presently no evidence they exist.

That would explain–though it can never be said, justify–why Israel bombed those places. But what explains the bullet casings left by Israeli soldiers on the floors of homes in Gaza? Is the most sophisticated military force in the world trying to take out alleged cement tunnels with bullets? Or were they more likely trying to kill the inhabitants–that is the ones who couldn’t escape & weren’t already buried in rubble?

This photo is a man in Rafah, Gaza cleaning up Israeli bullet casings in his sister’s bombed out house.

Respond to Israeli lies with massive protests & by honoring the economic boycott of Israel (barcode beginning 729).