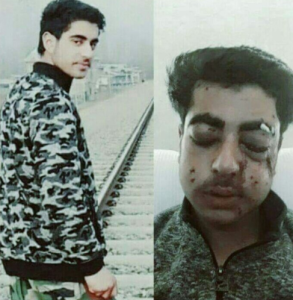 This is 15-year-old Suhail hit by pellets in both eyes & disfigured by occupying forces in Kashmir last Friday.

Yesterday Kashmir Reader reported there were night raids in several villages, hauling in scores of young people for stone pelting.

Protests were held in at least one village against the arrests.