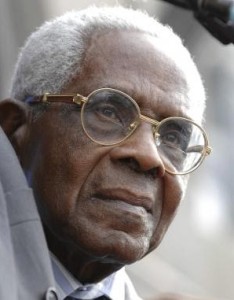 Aimé Césaire (1913-2008) was a poet & politician from Martinique, which was & still is a French territory in the Caribbean Sea. He is of that generation born in the first few decades following WWI. Despite the “war to end all wars” & “make the world safe for democracy” propaganda, WWI was primarily a conflict between major colonial powers over colonial booty & dividing up the world & it also signaled a crescendo in anti-colonial struggles everywhere. Many of today’s conflicts have their roots in that era.

Writers & activists like Césaire, including Frantz Fanon, Amilcar Cabral, C.L.R. James (to name just a few) were among the most prominent anti-colonial thinkers & were influenced by socialist ideas. Walter Rodney & Edward Said are of a slightly later generation. They are all rooted in the carnage of European colonialism.

The problems addressed so cogently by these writers remain the central political problems of our day & their writings remain essential reading on colonialism & its consequences. What is neoliberal capitalism anyway but colonialism writ large!?

Reading them is not like reading Zizek or Homi Bhaba or Jacques Derrida or Frederic Jameson. There is nothing obscurantist in their writings at all. You’re not buried knee-deep in adjectives without a verb in sight. These were people of action who wanted to make their ideas understood because they wanted to end colonialism & change the world.

This piece called “Discourse on Colonialism” by Césaire could not be more timely as the US plots a major escalation in Iraq, as US-NATO continue their barbarism in Afghanistan & elsewhere, & as Israel conducts a massive bombing assault in Gaza & crackdown in the West Bank. “Discourse” was first published in French in 1955 & not in English until nearly 20 years later. It’s power has inspired generations from Africa to Asia to Latin America & the Caribbean, & including Civil Rights, Black Power, & antiwar activists in the US. It is a classic call to arms against colonialism & against tyranny by a man with a powerful vision of social transformation.

It’s a bit long but worth it’s weight in gold: http://www.studyblue.com/notes/note/n/aime-cesaire-discourse-on-colonialismpdf/file/368019