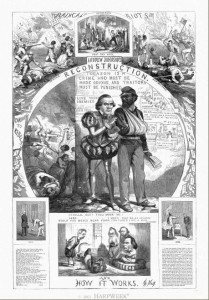 There is probably no more democratic art form in the European tradition than political cartooning–even though it now more often serves the status quo on the op ed page. It emerged in the 17th & 18th centuries with the democratic revolutions that overthrew feudalism & brought in capitalist states. Cartooning signals a shift in power relations between church, monarchies, & plebeians by the ability to lampoon power. The obsequious posture of serfs is replaced with defiance & ridicule.

Because colonialism was a political feature of those states, racist caricature has always been part of cartooning–particularly in depictions of the Irish, Jews, Blacks, Arabs. George Cruikshank, the great English cartoonist of the 19th century, originated the simian comparison on the Irish. The simian portrayal of Blacks has long been used to incite violence & social hatred & plagues caricature to this day–including of Obama & elite athletes.

Thomas Nast, in the 19th century, considered the pioneer of US cartooning, also portrayed the Irish as simian. Nast campaigned against political corruption & was an ardent supporter of the Civil War & Black Reconstruction; he championed Chinese immigration at a time when they were under attack & often attributed the violence to Irish immigrants. His caricatures however of Chinese appear quite racist to the modern eye, schooled by the Civil Rights Movement. His depictions of Blacks are often decidedly simian even while he championed Reconstruction. (Reconstruction was the political conflict between the white power structure & remnants of the Confederacy against Blacks to keep the latter out of political power in the south after the Civil War. It has been flagrantly misrepresented in US history.)

Dr. Seuss, the cartoonist & beloved writer of nearly 50 children’s books, spent most of his career drawing racist caricatures of Blacks, Arabs, & Japanese both for commercial ads & WWII war propaganda.
It serves no purpose to suggest free speech should be curtailed for racist cartoonists. That’s a classic case of cutting off your head to spite your face. Because it isn’t racists that need free speech. It’s dissidents who oppose all forms of racism & social hatred. Why drive hate into hiding when we need to know exactly what we’re up against? And when every foray we make against free speech will be used against us?

Despite the progressive thrust of his politics, most of Nast’s caricatures of Blacks are unusable today. This pro-Reconstruction cartoon is the best of a bad lot. What the movement for social justice needs is Black, Latino, women caricaturists who can put ugly on the face of power, who can take caricature back from the obsequious & restore the luster of rebellion & defiance against tyranny.