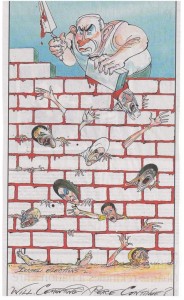 This cartoon of a thuggish Netan-psycho-yahu building a wall with the blood & bodies of Palestinians was published in the London Sunday Times in January 2013. It is by cartoonist Gerald Scarfe & provoked immediate denunciations of antisemitism from the likes of Tony Blair, Israeli politicians, Zionist organizations.

Knesset politician (now Israeli president) Reuven Rivlin wrote a letter of protest evoking the holocaust, saying ““For me & for other Israelis, this cartoon was reminiscent of the vicious journalism during one of the darkest periods in human history” & argued that it “blatantly crossed the line of freedom of expression.” Rivlin is an outspoken advocate for the outright annexation of the West Bank to Israel so he has a quite limited understanding of the concept of freedom of expression. Palestinians who do not agree with him are assaulted, dispossessed, & incarcerated.

Natan Sharansky, a Russian emigrant now head of the Jewish Agency (which promotes Zionist immigration to Israel to settle on Palestinian land) drew a connection between the cartoon & an increase in antisemitic violence in Europe. “There is a very tragic alliance between primitive, anti-democratic, nationalist, racist, fundamentalist forces who are committing most of the violence, & enlightened, liberal, intellectual representatives of the intelligentsia in Europe.” Sharansky wanted Scarfe branded as an antisemite.

Daniel Taub, Israeli ambassador to London, said the depiction of Netanyahu went too far, crossed “a red line,” drew on “classical antisemitic themes,” & he would be marching right on down to the editor to express Israel’s concerns.

Truth of the matter is, this is a somewhat flattering depiction of Netanyahu & lets him off quite easy given the scale of Israeli barbarism in Gaza. Blinking back tears about the holocaust & evoking antisemitism no longer deters criticism of Israeli apartheid & ethnic cleansing. You’re reaching to find antisemitism in this cartoon & doing so only to shame criticism of Israel. But you also demean those millions who lost their lives in the holocaust by using them for such purpose. That’s Eely Weasel’s schtick.

If Rivlin & all the boys have objection to “primitive, anti-democratic, nationalist, racist, fundamentalist forces,” they should raise them about the Charlie Hebdo cartoons because the massacre now makes Jews targets along with Muslims. Criticizing cartoons for racism, xenophobia, Islamophobia is not the same as demanding they be outlawed.

(Cartoon by Gerald Scarfe from the Sunday London Times)