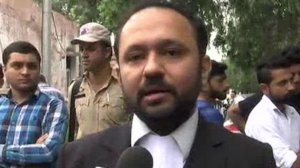 Kashmiri media reports that this guy, Ankur Sharma–the defense lawyer for the adult men who tortured, mutilated, gang raped, & murdered 8-year-old Asifa–was caught on video inciting a rally of Hindu nationalists to boycott the Gujjar & Bakarwal community as part of whipping up support for his clients. The Gujjar & Bakarwal–Asifa’s tribe–are Muslim & pastoral nomads although it appears some have settled in Jammu. They make a living selling dairy & other products associated with goats & sheep. Such a boycott in a predominantly Hindu region is potentially devastating & could force them to relocate. The lawyer also urged nationalists not to sell their properties to Muslims.

In his vituperations, Sharma invoked Hindu gods, specifically Lord Krishna, to make his case for the boycott: “Lord Krishna has told us to fight against some people who are trying to oust us from our own lands in an organized way.” He also claimed–based on what some guy somewhere once told him–that the Gujjar & Bakerwal community were brought to Jammu to change the demography of the region to Muslim. Inflammatory, rancid stuff so it’s a good thing hearsay doesn’t hold up in court.

Many media sources refer to the rape & murder of Asifa as ‘the Kathua case’ but this has an unfortunate way of distancing us from Asifa & her community who are being legally & politically maneuvered out of justice.

(Photo of the dirtball is from ANI)