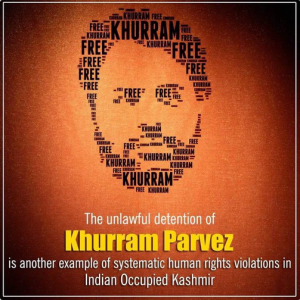 Day 130 of the murderous siege of Kashmir, with no let up in arrests or assaults on protesters nor in the resistance of Kashmiris.

This statement was released Monday by leaders of the Hurriyat Conference, a Kashmiri alliance of 26 political, social & religious pro-independence groups:

“Each day people in different areas of the valley are beaten up, raids & arrests carried out, homes & properties damaged & then shameless denials are made by authorities.

“While more than ninety five precious lives have been lost to the State savagery, hundreds have lost their eyesight & thousands their limbs, besides a sea of pain & suffering inflicted upon the masses in various ways as collective punishment, the collaborators have the audacity to preach instead of hanging their heads in shame & remorse.

“Such is their contempt for people’s suffering & sacrifices & so disaffected & disconnected are they from people that one among them makes the most preposterous statement about the thousands of Kashmiris languishing in jails by saying that inmates are enjoying life so much that he would like the authorities to put him there for some days so that he can equally enjoy.

“People’s struggle is not for getting small booties & concessions from their oppressor in lieu of accepting their subjugation, that we will see instant results. Our struggle is for real political empowerment & asserting our political will & future as a nation through self determination & that is a long, hard & strenuous journey especially in view of the mighty, powerful & cunning subjugator that we are face to face with.

“For the past 70 years the struggle is on, manifesting itself in various forms & expressions but continuously watered & kept alive with sacrifices & resilience of people.”

This is also day 62 of the unlawful detention of Khurram Parvez. Please like & share his defense page on FB if you have not already: