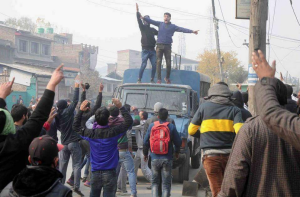 Resistance in Kashmir has remarkably not abated since July 8th when a young Kashmiri was executed by the Indian army. We are not allowed to say his name or show his photo on FB without being suspended but his funeral, so large it was in rotating shifts, was attended by 600,000 people, .

Most shops, fuel stations & other businesses are still shut down in Srinagar & in other districts of the Valley due to the protest strike called by the alliance of pro-independence organizations. Protests & sit-ins continue.

The Indian government intends to wear down the resistance with violence. How many decades more will it take before India gets the message that surrender to colonialism isn’t going to happen.