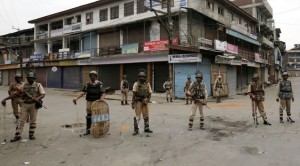 Media isn’t reporting the details of the curfew in Kashmir but only that it has been in force since July 9th. India has imposed restriction of movement which entails restriction on access to vital services. What if you require emergency medical treatment during the curfew period? If you try to get to a hospital will the Indian army shoot you down?

Consider what it means that a government allocates to itself the power to lock in an entire population like they were recalcitrant children. But of course it’s only done to prevent public gatherings to protest the occupation. That’s how afraid the Indian government is of democracy.

Photo is streets of Srinagar under curfew.

(Photo by Shuaib Masoodi in the Indian Express)