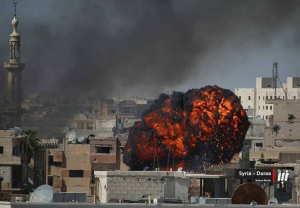 Syrian forces are conducting a murderous ground & air bombardment of Daraa. This airstrike a few days ago is on a city of nearly 100,000 civilians. The city is 90 km (56 mi) south of Damascus & 13 km (8 mi) north of the border with Jordan.

Daraa is known as the “cradle of the Syrian revolution” because it sparked the revolution against the Assad regime in March 2011 when the regime arrested & severely tortured 15 young boys for spray painting anti-Assad graffiti calling for the downfall of the regime. Thousands of protesters demanding the release of the kids & political freedom were attacked by Assad troops using water cannons & teargas before they opened fire on the unarmed protesters. The protests spread across Syria & ignited the revolution which is battered & weak but not yet defeated.

The only principled antiwar response is to demand Assad stop the bombing & the immediate, unconditional withdrawal of all foreign military forces including the US, Russia, Iran, Hizbollah.

Our unconditional support for the Syrian revolution. One of the greatest tragedies of our era is the lack of international solidarity with the revolution against a monstrous dictator & the greatest crime is the support by so many for the counter-revolution involving Assad, Putin, Trump.