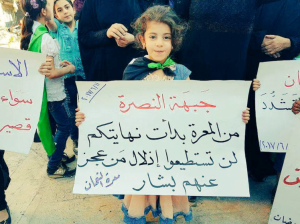 There are protests across Idlib, Syria against Al-Qaeda/Nusra terrorists by supporters of the revolution against the Assad dictatorship. This child is at a protest in Maarat Al-Nooman about 33 km (21 mi) south of Idlib.

The placard says: “O Jabhat Al-Nusra. From Maarat Al-Nooman your end has come. You cannot humiliate what Bashar Al-Assad couldn’t.”
She’s not thinking about national sovereignty like the Hands Off Syria crowd; she’s thinking the end of bombing & terrorism–the two sides of the counter-revolution. She’s thinking democracy & justice & peace & the end of Assad’s gulag.

(Tweeted by Lina Shamy from Syria)