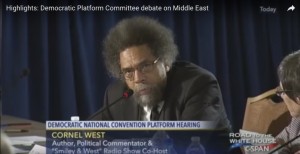 Apparently nowadays, you become a people’s hero if you recognize the humanity of the Palestinians–which is nothing but a lousy discount on self-determination & justice. Why should they settle for ceremonial rhetoric & political chump change & who in the hell do we think we are in brokering the discounts?

West feigns an ambivalent relationship to the Democratic Party; his political biography is filled with mea culpas over which lesser evil he claims he was schnookered by. Talking tough to power by advocating BDS & citing the Israeli occupation is not courageous but an impotent grandstanding gesture because he knows it doesn’t stand a snowball’s chance in hell of inclusion in the DP platform. But it does assure him of substantial honoraria as an outspoken voice for people’s power.

But even if it did become platform, so what? There isn’t a single instance when US political policy has been governed or restrained by what a handful of minions & party hacks decide. It’s all for show since US policy toward Israel–which is exactly the same in both parties–is not determined by functionaries but by think tanks, special consultants, the Pentagon, CIA, & US strategic interests in the Middle East.

West is playing us for fools to maintain the hold of the Democratic Party on progressives. That’s his role as Sanders’ minion.

The point however is to build BDS to strengthen Palestinian political power & in that regard grandstanding doesn’t cut it.