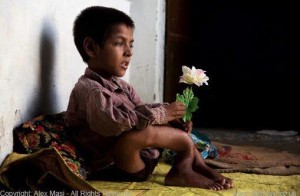 In case anyone missed it, the petition circulated by Bhopal justice activists gathered 122,727 signatures in 30 days. It demands the US government stop obstructing justice by shielding Dow Chemical from accountability in the 1984 toxic gas release in Bhopal, India. Up to 10,000 people were killed instantly, 500,000 maimed, & it has left a legacy of second & third generation neurological health problems, serious disabilities, & environmental ruin. What kind of criminality allows a corporation to walk away from justice for such immense wreckage!?

This boy named Faizan lives near the former Union Carbide (now Dow) industrial complex. Not properly warned, his mother, a 1984 accident survivor, has been feeding Faizan red-colored contaminated water since his birth & the family relies on it for cooking, laundry, bathing. This picture is not to hold him up as an object of pity since, as we’ve learned from disability rights, everyone is perfect just as they are. It is to show the scale of the criminal legacy Dow is trying to elude. This little guy, now a teen, requires significant social assistance to lead the life he’s worthy of.

We should take a moment to honor the relentless Bhopal activists & be grateful & proud we could play a small part in supporting their efforts. Actually for those in the US, it is our duty to hold our government to account.

Special thanks to Roshen Chandran.