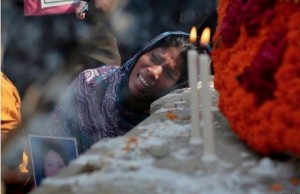 Reposting lest we forget the collapse of Rana Plaza on April 24th 2013 & the criminal monstrosity of sweatshop economics.

Nothing has improved for sweatshop workers in Bangladesh (or anywhere else) & labor organizing is still brutally repressed; US, Japanese, & European retailers never came through with pledged compensation for the hundreds disabled in the collapse & are still profiting from the labor of children & mostly women. But Bangladeshi sweatshop workers are still fighting back & for that working people around the world honor them & hope to learn from them.

If one ever needs proof that capitalism has entered its barbaric phase, reading Forbes magazine will lay all doubts to rest. In the period of its decline capitalism doesn’t have access to writers & apologists of the highest moral & intellectual character & has to resort to troll-like thinkers that operate like court jesters from medieval courts. The only thing they’re missing is the little cap with bells on it & the phony scepter that signify a fool.

This is the second anniversary of the Rana Plaza collapse in Dhaka, Bangladesh where 1,135 garment workers, mostly women & children, died & over 2,500 were injured–many permanently disabled & no longer able to work. Many were buried alive in the rubble. There are still 135 bodies buried in mass graves whose DNA has not been identified so families can give respectful burial.

Nothing has changed for sweatshop workers in Bangladesh; under international scrutiny the wages were raised from US $9 to $16 a week. Some of the 29 US & European retailers they produced for sell a pair of underwear for more than $16. But most importantly, after the initial furor from the Rana collapse calmed down, none of the retailers forked over any compensation money to the victims’ families.

And this is where the intellectual tinker-bells of capitalism come in. In article after article, before bodies had even been recovered from Rana rubble, these amoral apologists were arguing that sweatshops & child labor are necessary, progressive, & improve the lives of their workers; that almost $2 a day beats the World Bank poverty measure of $1.25 a day; that “poor” countries cannot afford the safety standards of “rich” countries; that if sweatshops lay the kids off they’ll all become prostitutes; that it is outright colonialism for retailers to demand safety standards in foreign sweatshops; that poor people in Africa, Asia, & elsewhere clamor for sweatshop jobs. You read too much of this crap at one sitting, you get constipated.

We should take a moment to honor those who died & those who survived the Rana Plaza collapse. And we should commit ourselves to ridding this planet of the abomination of exploited labor.

(Photo is a woman grieving a beloved lost in the Rana collapse; by A. M. Ahad/AP)