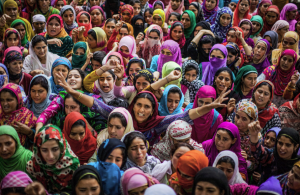 Irfan Mehraj, the editor of Wande Magazine, has been running a series of interviews with the Kashmiri women co-authors of “Do You Remember Kunan Poshpora?.” It’s such a valuable series about how they deal with the sensitivities & brutalities of state-sponsored sexual violence. We need to understand in our bones what they do: that the shame of these crimes adheres to the perpetrators unleashed by oppressive governments & not to the victims. It is the educational part of mobilizing to end this monstrous crime all over the world.

These are three of the series not yet posted on this wall (if you want the others reposted here again, just say so.)

These are Kashmiri women at funeral/protest of 23-year-old Bilal Ahmad Bhat in August 2015.They are protesting Indian paramilitary thugs executing Bhat & opening fire on protesters who later protested the killing. There are countless photos of Kashmiri women protesting.