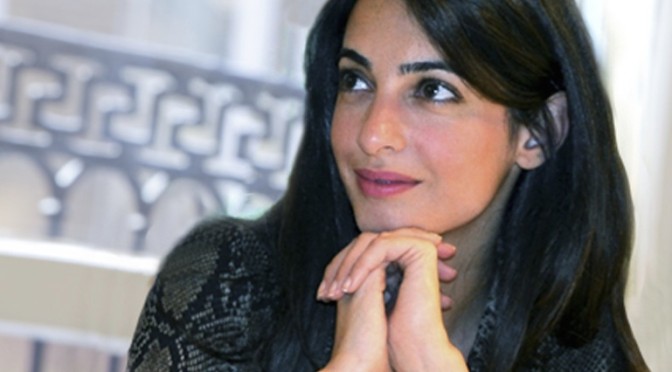 Let me wade into the treacherous waters of celebrity gossip to disagree with media reports that Amal Alamuddin must be a very special woman to snag George Clooney. On the contrary! They both appear to be bums. There’s a reason why the guy has a stuffed dossier of former girlfriends. The assumption is he dumped them; odds are better that they dumped him.

Clooney is intentionally mis-identified in media as progressive when he episodically suspends womanizing for brief forays into international war-mongering against Sudan. Likewise, though lauded in media as a human rights lawyer, her credentials are no more impressive. Her clients as a lawyer with a New York corporate law firm included Enron & Arthur Andersen, the accounting firm that helped Enron cook the books.

Other than Wikileaks founder Julian Assange, her clientele is not impressive at all from a human rights perspective: corrupt Ukrainian politician Yulia Tymoshenko; Kofi Annan, now the chair of The Elders who actively oppose the BDS movement; & most despicably, Hamad Al Khalifa, the king of Bahrain during his violent assaults on the democracy movement in 2011.

She works for a London law firm now involved in “criminal justice, public law, immigration, employment, human rights, & civil liberties work.” That doesn’t say which side of the aisle they work.

No one would dispute the good looks of either one; they’ll likely have good-looking kids. Hopefully the kids won’t absorb the stench from war-mongering & covering for bloody dictators.