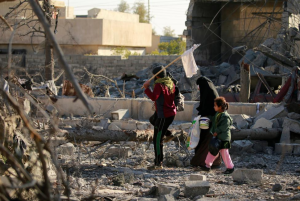 Civilians in Mosul, Iraq fleeing from bombers & ground fighting between Iraqi & US-coalition forces against ISIS fighters:
This is the model for fighting ‘terrorism’ employed by the US-NATO & Russia & all their allies: carpet bombing cities with hundreds of thousands of unarmed civilians, including elderly, infirm, children, pregnant women.

The problem with this model is that it kills, disables, traumatizes, & displaces tens of thousands more civilians than it does ‘terrorists’ & doesn’t do a damn thing to end terrorism. The civilians don’t feel so liberated so much as they know they’re the targets.

There is another model: take your armies & your bombers & get the hell out. Arm Iraqis & Syrians so they can defend themselves.