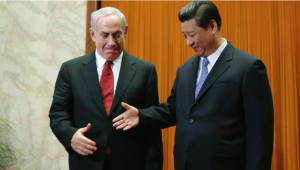 Does anyone really care what China thinks about the US declaring Jerusalem the capital of Israel while China is arming the Burmese military to exterminate the Rohingya people? With an economy based on sweatshops & a party to genocide, China has no cachet when it comes to human rights. In response to Trump’s provocation, China repeated its proposal for a Palestinian bantustate. Hardly avant-garde when the two-state thing is a stinking corpse reeking of deception & betrayal.

What China doesn’t talk about is its multi-million dollar contracts with Israel, including with universities & Israeli settlements in the West Bank, for high-tech & manufacturing technologies. In part, these contracts serve China’s economic needs & advance its political influence in the Middle East in competition with the US. In large part, these contracts counter the impact of the Boycott, Divestment, & Sanctions (BDS) movement on the Israeli economy–& that is how China is making itself important to Israel.

Stand with Palestinians by honoring the economic boycott of Israel. Check every label on the products you buy to make certain the country of origin is not Israel.

Photo is Netanyahu being feted by Chinese president Xi Jinping in Beijing in May 2013.